Bamberg and its tunnels 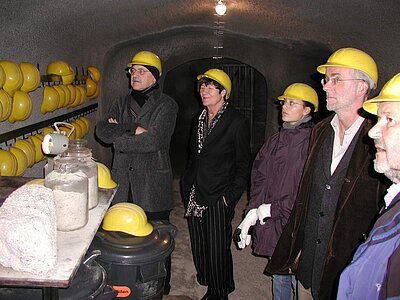 Bamberg's seven hills district was undermined as early as the middle ages, in search of sand used for scouring powder. This mining work was continued until the early age of industrialisation. In the 17th and 18th century the tunnels were used as a storage place for wine, later also for beer and malt. More tunnels were added in the 19th century. Altogether the tunnels in Bamberg's Stephansberg and Kaulberg hills amount to a total of about 8 miles. During the Second World War the tunnels were also used as an air-raid shelter.

Notices
The organising body of visitor groups is obliged to point out the safety measures for the guided tour “Bamberg and its tunnels” as summarized in the following safety regulations, available as a download via the box on the right hand side of your screen.
You will receive these safety regulations additionally in a separate mail or by post with the confirmation of your booking. In order to conduct the tour, it is necessary to sign the regulation form and hand it over to your guide at the beginning of the tour.

The tour is conducted at one's own risk.
Payment by invoice only. (In contrast to our business terms in this case without surplus costs)

Safety regulations for group tours of the galleries