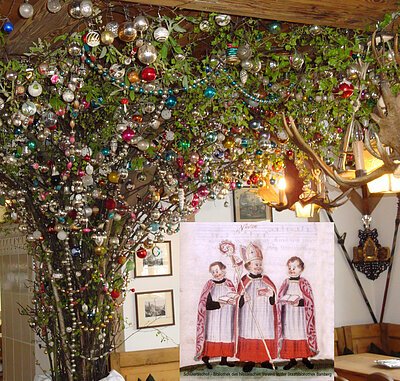 You can explore the old Christmas customs from St. Martin's Day to Epiphany in the magical atmosphere of a beautifully decorated Christmas city

Although the city was already christianised by Emperor Heinrich, many pagan customs were practised by the common folk for centuries after, many of which were influenced by and adapted to Christianity. The era of the prince-bishops also saw the addition of different Christmas traditions. You can explore the diversity of Christmas customs practised in the period from St. Martin's Day to Epiphany in the magical atmosphere of a beautifully decorated Christmas city. You will learn, for example, about the Bamberg apple trees that bore fruit in the night of Christ's birth or what it means to be "peppered". You will also find out how the prince-bishop spent Christmas Day, as well as about "Perlefex" who, in the Twelve Days of Christmas, spread unrest in Bamberg's lanes.

Number of participants:
Up to 25 per guide

Dates:
Available from the last weekend in November to Epiphany (6th January), also in the evening. The guided tour is mostly outdoors.

120,- (one piece of German Lebkuchen per person is included)
Registration necessary!