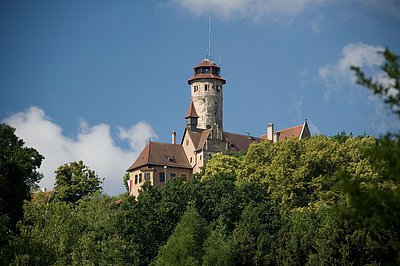 The castle was first mentioned in 1109 and was used at this time as a refuge. In the 14th and 15th centuries it served as a richly furnished residence for Bamberg's bishops, but was almost completely destroyed in 1553 by margrave Alfred Alcibiades von Brandenburg-Kulmbach in the second margrave war. The only remains of the mediaeval construction are the 33 metre keep from the 13th century and parts of the surrounding wall. An iron basket hangs from the upper section of the tower which was used to send fire signals to Giechburg castle near Scheßlitz, 20km away. In the Romance period, Altenburg Castle was rebuilt. E.T.A. Hoffmann retreated to one of the wall towers in 1812, to which the "Hoffmannsklause" restaurant in the new building of the former palace (1901/02) owes its name. The terrace commands a panoramic view of the episcopal town and the surrounding region.