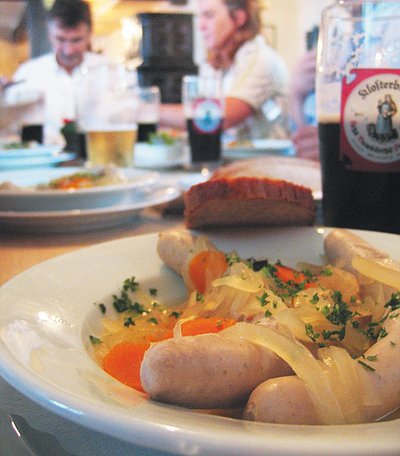 The Bamberg region is characterised by an immense culinary diversity, with everything from fresh vegetables and fish to full-bodied beer and fine pastries.

Among beer lovers, Bamberg is best known for its aromatic smoked beer, which is brewed by two of the town's breweries. Top chefs and epicures prefer Franconian asparagus and Bamberger Hörnla, a rare but all the more delicious potato variety. Anyone walking through the town, admiring the many temptations offered by the bakeries, will perhaps also notice the other kind of Bamberg Hörnla - a croissant-like butter pastry.

More than 1000 years ago, long before Bamberg became famous for its beer, the region already had a large number of wine-growing areas.

A taste of what to expect on your visit to Bamberg is provided by the delicious meals, suggested on the following pages. Savour the "blue" sausages, Bamberg's onions and a Franconian knuckle in smoked beer sauce. Enjoy recreating these specialities in the comfort of your home.