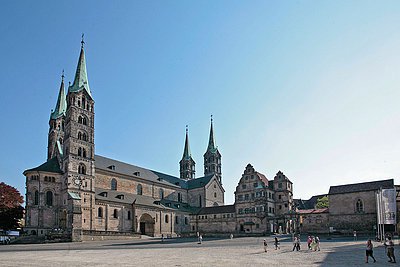 One of the most impressive squares, featuring architectural styles from all periods, the Old Court, the New Residence and the Rose Garden

The Imperial Cathedral with four spires is perched on top of one of Bamberg's seven hills and forms the heart of the city and the region's most significant edifice. St. Peter's and St. Paul's Cathedral was originally established by Heinrich II, who founded the diocese of Bamberg in 1007. Ranking among the most significant sights are the papal tomb of Clemens II, which is the only papal tomb north of the Alps to be recognised by the Vatican, and the Bamberg Horseman. Despite in-depth research the identities of the horseman and the sculptor remain a mystery.