City on the hills 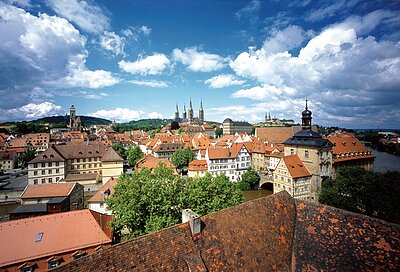 Narrow lanes, baroque and romantic facades, mediaeval flair and the magic of the centuries make Bamberg what it is today.

Bamberg's nicknames - the "Seven Hill City" or "Franconian Rome" - refer to the part of the city situated on the hills. Cathedral Hill was the spiritual and secular centre of power in the diocese of Bamberg from the 11th century until 1802. This is where some of Bamberg's best-known and prominent buidings are located, including the Imperial Cathedral, the baroque New Residence, the Old Court and Michelsberg Monastery. Additional striking features in this district are the former monasteries of St. Stephan and St. Jacob and the Parish "Church of Our Lady" (Upper Parish). Altenburg Castle which towers above the city, the greenery of the hills and the church spires, which can be spotted from afar, are typical landmarks of Bamberg.

The bourgeois city on the hills

Besides the dominance of the church institutions, the cityscape in this area is also characterised by the bourgeois settlements in the Sand district (Sandstraße), at the foot of Kaulberg and Stephansberg as well as the settlements on the hills. Here the homes of tradesmen alternated with breweries, bourgeois houses and even palatial edifices. The former wine-growers' settlement lines the road ascending the Kaulberg. The special aesthetic quality of the city on the hills is heightened by the ever-changing, breathtaking views and aspects within the area and the many panoramic views across the city in the valley.

The four-spire cathedral perched on top of one of Bamberg's seven hills is the true heart of the town and the most significant work of art in the region. St. Peter's and St. George's Cathedral was founded by Emperor Heinrich II. who established the bishopric of Bamberg in 1007. Ranking among the most important sights are the papal tomb of Clemens II., the only papal tomb north of the Alps to be recognised by the Vatican, and of course the Bamberg Horseman. Despite lengthy research, the identity of both the statue and its sculptor still remain a mystery.

The Old Court, the heart of which was once the imperial and episcopal palace, was previously directly linked with the Cathedral. The "Beautiful Gateway" opens out into a romantic inner court surrounded by half-timbered buildings. The Rose Garden is situated opposite.

Prince bishop Friedrich Karl von Schönborn had this garden created after regular, symmetrical designs by Balthasar Neumann. Every year, musical performances are also staged here. The Rose Garden Serenades are lent their unique character by the interplay between beautiful music and the magical atmosphere of the garden.