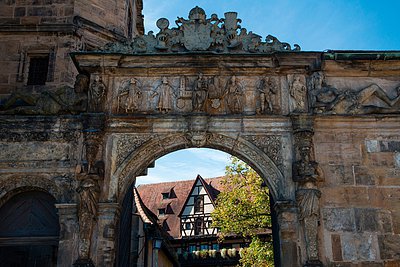 The Old Court ranks among the most impressive buildings in the city. The complex once served as the bishop's residence.

The precursor to the Old Court was the Castrum Babenberg and the former palace of Emperor Heinrich II. After the foundation of the bishopric in 1007, it was also used as the bishop's residence. Following the Cathedral fire in 1185 a single-storey palace was built on this spot, which replaced in the 16th century with a splendid German renaissance building. The "Beautiful Gateway" by sculptor Pankras Wagner catches the eye: it depicts a relief of the Mother of God, St. Peter, St. George, St. Kunigunde and St. Heinrich as well as personifications of the rivers Main and Regnitz. The gateway leads into the romantic inner court which is lined with half-timbered buildings.

The Old Court accommodates the Museum of History and St. Katherine's Chapel which is used for civil wedding ceremonies. 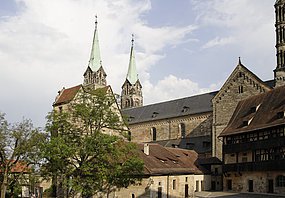