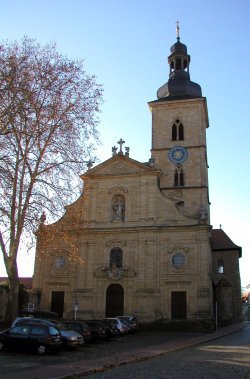 Despite its baroque facade, St. Jacob's is the only completely romanesque church in Bamberg.

In the 11th and 12th centuries, when the church was built, it was situated outside the fortifications around Cathedral Hill, and was used by numerous Jacob pilgrims on their way to Santiago de Compostela. Initially, the church was modelled around Heinrich's cathedral and was constructed as a column basilica. In 1771 the baroque facade was added, behind which numerous components from the romanesque period can still be discovered. Inside it is impossible to overlook the many romanesque elements.