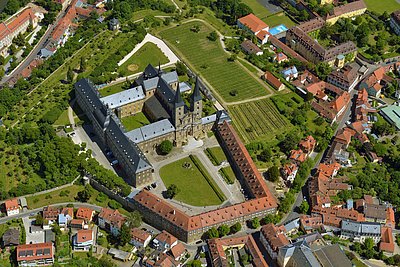 On the initiative of Emperor Heinrich II., the former Benedictine monastery of St. Michael was founded in 1015. Today its imposing baroque style architecture cannot fail to impress.

As early as 1117 the first church was destroyed by an earthquake. Bishop Otto then had a romanesque house of worship constructed, with only minor changes being made to the mediaeval monastery's appearance until the 17th century. Following a fire in 1610, the church was rebuilt in a neo-gothic style. In the 18th century, the Dientzenhofer brothers gave the monastery a baroque facelift. The baroque church facade with its impressive flight of steps, the tomb of St. Otto and the neo-gothic reticulated vault are well worth seeing. A highlight inside the church is the "celestial garden", a fresco featuring 578 flowers and herbs. The terrace behind the church commands a panoramic view of the city. It is well worth strolling through the baroque terraced gardens, featuring a fountain and two pavilions.

Please note, that the church cannot be visited inside at the moment, as comprehensive restoration work is necessary and will probably take some years.