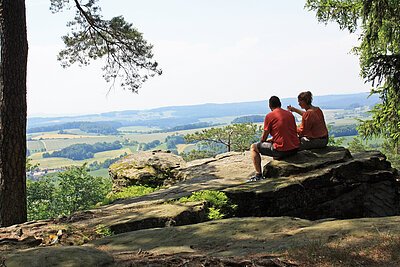 The myth-enshrouded Veitenstein, a sandstone rock which rears up at the western edge of Lußberg Hill, offers a great view deep into the Haßberge.

Located within is a natural cave where old inscriptions can be found. The inscriptions and fictile pieces found there indicate, that the Veitenstein was already inhabited from the fourth to second century BC. Other sights of historical importance include the Jewish cemetery in Reckendorf with over 400 epitaphs, and a marvellous wooden gate in Baunach, dating back to 1710. The gate with the wooden men was originally situated in front of the so-called Kastenhof, the old court.