Franconian Framework at its Finest 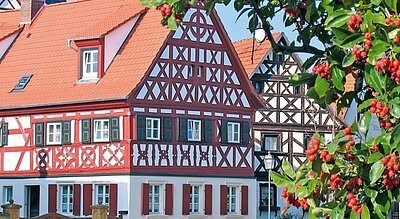 Typical Franconian half-timbered houses with elaborate ornamentation such as St. Andrew’s crosses, additional braces or coloured spaces between the timber frames bestow the picturesque villages of the Itzgrund with their special character.

Many of these half-timbered buildings from the 17th to 19th century have been renovated with care and in great detail, especially in Rattelsdorf and Mürsbach. Between the two places, the path leads over wooded mountain ranges, passes fields and glades and eventually leads along the Itzgrund, a small, concealed jewel of northern Bamberg County.