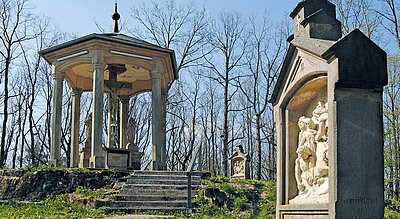 The Kreuzberg Hill ascends not far from Dörfleins, the southeasternmost point of the Hassberge Nature Park. A crossroads leads to the so-called temple; built in the 19th century on top of a hill, this chapel offers a glorious view towards the Valley of the River Main.

Deep in the woods, you will encounter a mysterious ruin: the remains of the late gothic Chapel of Helena. Called the “chapel of the miserable saints”, it was originally consecrated to the holy Felicity and long believed to be haunted. According to tradition, the water from her well was supposed to be able to cure diseases.