Discovery Tour from Bamberg to Nuremberg 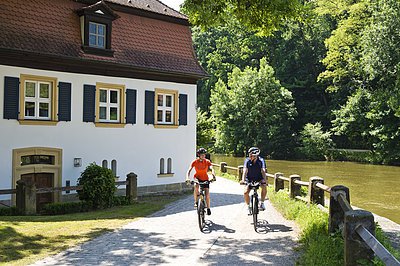 This bike trail takes you from Nuremberg to Bamberg through the lovely valley of the River Regnitz. The trail offers two alternative routes, one following the canal, the other the valley.

The Regnitz Valley is located between the towns of Bamberg and Nuremberg, enabling you to experience the amazing towns of Bamberg, Forchheim, Erlangen, Fürth, and Nuremberg and many other sights en route. The picturesque 85 km long valley route meanders through many towns and hamlets with their typical half timber houses. Parallel to it is the 75 km long canal route that follows the banks of the Main-Danube-Canal and the River Regnitz. Both routes can be combined for a lovely loop tour.

It runs mainly far from traffic and roads.

Whereas the canal route has no elevation at all, there are several short and slight hills to negotiate on the valley route.

Do you want to load external content supplied by OpenStreetMap/Leaflet?