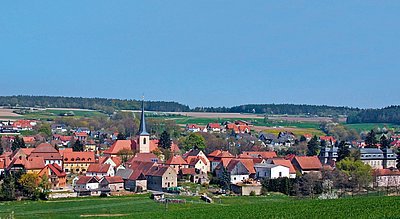 First mentioned in 1136, Burgwindheim, located in the valley of the River Middle Ebrach, was given the market rights in 1363, which makes it the oldest market village of the Steigerwald.

It was here at the Corpus Christi procession in 1465, when a miracle of the host took place. A monstrance and its host fell to the floor and could not be picked up by the parish priest; only the abbot of the monastery of Erbrach was able to accomplish that after an eight-day-long prayer of the Ebrach convent. Thus, Burgwindheim became a pilgrimage site. To commemorate this miracle of the host, Johann Dientzenhofer built the chapel of the “holy blood” only two years after the miracle took place.