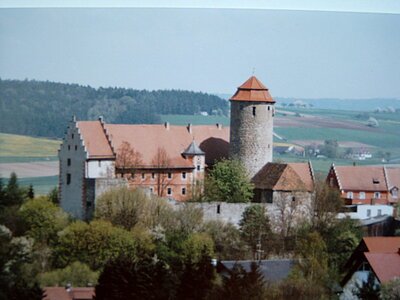 Lisberg castle is one of the oldest castles in the Steigerwald

Lisberg castle - one of the oldest castles in Franconia – was first mentioned in an historical document in 820. Being in possession of the Babenberger family – earls of the region – it has been used as a sanctuary for the people of the Region. Lisberg castle belonged to the Catholic prince bishops of Bamberg and the protestant Markgraves of Ansbach at the same time. Whenever necessary, the people of Lisberg simply changed sides and then evaded destruction, which was the fate of all other 31 castles in the Steigerwald area. The oldest building of the castle is the romantic donjon and the dark awesome prison. The internal castle gate is also of Romanic style. The womens’ house is in Gothic style and the palace is in Renaissance style, built around 1600. The most beautiful rooms are the large kitchen and the great hall which was redesigned by Otto Philipp von Muenster in the year 1776. During the last centuries many noble families occupied the castle. The most important lords of the castle were the Freiherrn of Muenster. Mr. Hans Fischer bought the castle from the last owners of noble origin in 1968 and renovated and revived it with passion and good craftsmanship. Shortly before Hans Fischer's death in 2016 he managed to sell his castle to Johann Sebök, a Bamberg auctioneer and antiques dealer, who now has great new ideas and concepts for this landmark castle.

You can book the castle for events, weddings and all sorts of incentives, guided tours are also possible, check out www.burg-lisberg-events.de